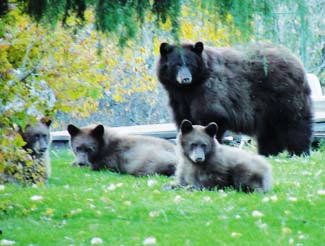 The Craftsman Lodge lies in the heart of bear country. While the chances of meeting bears are relatively low, largely because of bears’ disinterest in most people, you must know how to avoid, recognize, and deal with bear encounters.
Bears are strong and agile wild animals that will defend themselves, their young, and their territory if they feel threatened. All bears are potentially dangerous; they are unpredictable and able to inflict serious injury. NEVER feed or approach a bear.

“So enjoyed this beautiful & spacious home during our wedding event in Rye. Short Stay but made enjoyable by the view, the weather, and this comfortable home. Thank you!”
– The Wooten Family

“Had a wonderful stay this past weekend! Such a beautiful clean home with a relaxing feel. Saw a bear and lots of beautiful wildlife!”
– McKenzie Family